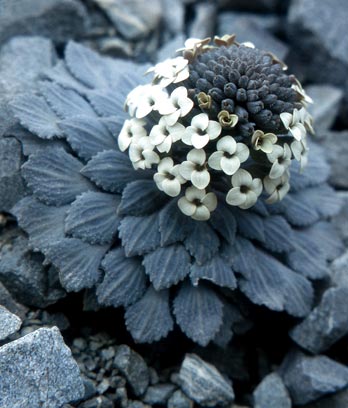 A rich assemblage of plants has evolved and diversified in New Zealand’s high mountains, where some grow wedged into rock crevices or anchored to scree slopes. A fifth of New Zealand’s flowering plants – 500 species – grow exclusively in rugged, cold alpine environments.

Alpine plants are special because they can live in low temperatures. There are about 1,000 native plants that can grow in the mountains of New Zealand, 500 of which are found in no other environment.

The alpine zone is the area on a mountain between where trees stop growing (the timberline) and where permanent snow begins. About 11% of New Zealand is alpine land, including parts of the Southern Alps in the South Island, and the volcanoes in the centre of the North Island.

Alpine plants have adapted in different ways to survive low temperatures. Many are small and compact, but often have large white flowers to attract pollinating insects or birds. Some plants make chemicals to stop them from freezing. And some conserve energy by not reproducing every year.

Animals introduced from overseas have had a harmful effect on New Zealand's native alpine plants. Mammals such as red deer and hares trample the vegetation and eat out the edible plants. Some introduced plants have invaded alpine areas and are considered weeds.

Print the full story
Next: Page 1. Alpine New Zealand Next