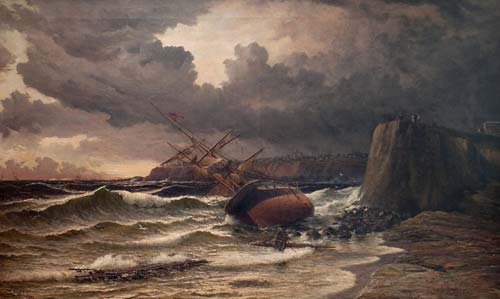 In 1882 the ships Benvenue and City of Perth broke their moorings in heavy seas, the Benvenue running aground at Timaru beach. The crews took to lifeboats and reached the safety of the breakwater. An attempt was then made to save the drifting City of Perth. A number of surfboats and whaleboats were launched. When several capsized in the mountainous seas, nine men drowned. John Gibb’s 1883 painting, ‘After the storm’, shows the stricken Benvenue beneath the (subsequently named) Benvenue cliffs.