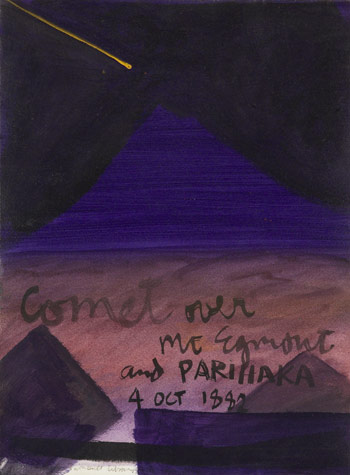 After the wars of the 1860s, large areas of land were confiscated from Māori. In Taranaki, resistance to the ongoing loss of land, and to European occupation of it, was centred at Parihaka. It was here that the prophets Te Whiti-o-Rongomai and Tohu Kākahi led a campaign of passive resistance. The occupation of Parihaka in 1881 by colonial troops and the imprisonment of the prophets and their followers is a key event in New Zealand’s history. This is one of a series of paintings (1972) about the incident, by Ralph Hotere. It includes the comet which appeared over Mt Taranaki (Egmont) in November 1882, a year after the occupation of Parihaka.