'Encampment of Chute's forces near Pūtahi pā, on the Whenuakura River' 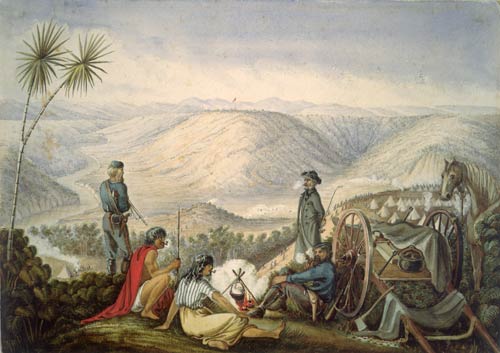 Supporting Te Āti Awa’s refusal to sell land to Europeans, Ngāti Ruanui sent soldiers to fight alongside Te Āti Awa when the first Taranaki war broke out in 1860. However, after the war government troops conducted search-and-destroy attacks on Ngāti Ruanui villages. Among the more damaging of these was the march of General Trevor Chute in early 1866. His forces burnt villages, destroyed crops and killed anyone who resisted. In this watercolour by Major Gustavus von Tempsky, von Tempsky himself is seated by the cartwheel; behind him is the superintendent of Wellington province, Dr Isaac Featherston. To the right is the British and colonial camp, and Te Pūtahi pā, which suffered attack, is on high ground across the river.