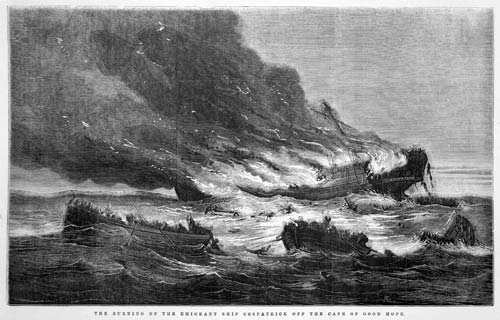 Although many emigrants, especially children, died at sea on the long voyage, few sailings ended in disaster. But ships did founder and disappear. The Cospatrick caught fire off the Cape of Good Hope in 1874, resulting in what has been considered New Zealand’s worst civil disaster. Here is the story:

On the night of 17 November 1874, the immigrant ship Cospatrick was in the south Atlantic, several hundred kilometres south-west of Cape Town. The ship had left Gravesend more than two months before, with 433 emigrants bound for Auckland. When the watch of the second mate, Henry McDonald, ended at midnight on that dreadful night, he walked around the deck and found ‘all well’.

Half an hour after he retired he was woken by the fearful cry, ‘Fire!’ On deck he found smoke and then flames pouring from the forehatch, the passengers rushing about in a state of great agitation and the crew fighting to extinguish the blaze. Their efforts were in vain and the fire soon had an impregnable hold.

One overloaded lifeboat capsized on touching the water. All in it perished. When the Cospatrick finally sank, 40 hours after the fire had been discovered, two lifeboats were left floating on the empty sea, with 62 survivors – passengers and crew – aboard. Both boats were without food or water. When the wind got up a few days later, they became separated and one boat was never seen again. By the time the second was found by a passing British ship, ten days after the fire, only five people were alive. Two died soon after being rescued. Of the 473 aboard when the ship caught fire, only three survived.

A court of inquiry in England found that the fire probably started when one of the crew or a passenger pilfering cargo set fire to straw or some similar material with a match or candle. The fire gained a rapid hold because of the flammable goods stored in the forehold – coal, turpentine, palm oil, spirits and other oils.

The only comparable tragedy was the loss of the Trevelyan, which left Glasgow on its seventh voyage to New Zealand in 1888. It failed to arrive and probably foundered, with the loss of all on board, off the coast of South Africa.

The Cospatrick’s emigrants were also still thousands of kilometres from New Zealand when they perished. But the incident can fairly be considered New Zealand’s worst civil disaster. The horror of the event underscores the risks and dangers faced by those who made the long voyage out in the 19th century.

John Wilson, 'The voyage out - Departure to landing', Te Ara - the Encyclopedia of New Zealand, http://www.TeAra.govt.nz/en/artwork/2563/fire-on-the-cospatrick (accessed 17 May 2022)

This is the saddest event