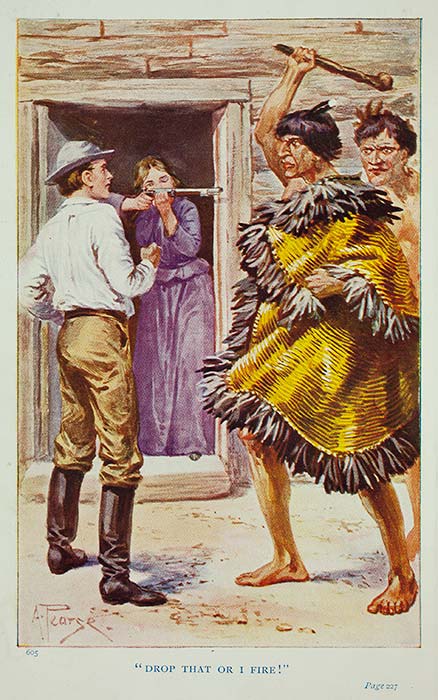 Englishman George Henty was a popular author of adventure novels for children in the late 19th century. He was an ardent supporter of imperialism and some of his books had colonial settings, including Maori and settlers, a story of the New Zealand war (1891). War was a favourite topic because it provided plenty of scope for action and adventure.

The young, resourceful hero of Maori and settlers is Wilfred Renshaw, who immigrates to New Zealand with his mother, father and sister Marion after their fortune is lost in a bank failure. The New Zealand wars are in full swing, but the family plan to buy land in a peaceful area. However, war comes to their chosen locale of Hawke's Bay. In this scene, some Māori men who are unknown to Wilfred and Marion stop by the house and ask for food. After being prevented from entering by Wilfred, the leader makes as if to assault him, but is surprised by Marion, who appears at the front door with a loaded rifle.