William Strutt, 'On the beach at Onehunga' 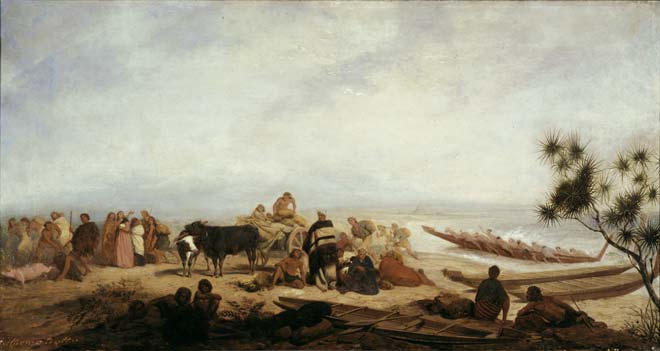 William Strutt was from a family of English painters. He migrated to Australia for health reasons in 1850 and then came to Taranaki, intending to farm. However, he found the bush oppressive and in 1856 moved to Auckland and then returned to Melbourne, where he made an important contribution to Australian painting.

It was once thought that this was a historical painting showing the return of Te Āti Awa from Waikanae to New Plymouth, but it seems that it was based on a scene that Strutt saw in Onehunga while in Auckland. He recorded the sight in his journal: 'Before leaving Onehunga a pretty sight presented itself to us. The morning was lovely and the charming bay and beach were quite animated with a fleet of canoes, just arrived with all sorts of produce for the Auckland market. The picturesque canoes were beached to the lively song of the natives, their contents landed and the tribe gathered together to hear a short speech from a fine old chief.' The waka (canoes) and the Māori in their traditional clothing clearly appealed to Strutt for their 'picturesque' qualities.

'A perforated rock in New Zealand'