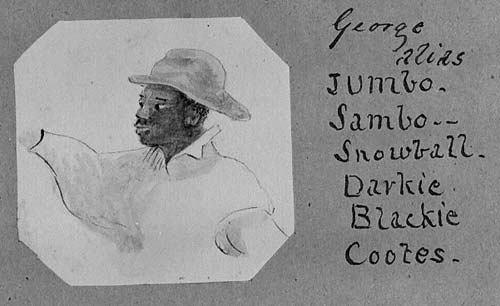 In all likelihood the first Africans in New Zealand were African Americans working on New England whaling ships in the 1830s and 1840s. ‘George’, depicted here by passenger John Pearse, was on board the Duke of Portland, which landed settlers in New Zealand in 1851. A handful of Africans arrived during this period. A black cook, a station manager and a bullock driver were working on various Southland sheep runs during the 1850s and 1860s. However they were not necessarily well received. As the offensive names written alongside George's image suggests, there was considerable racism towards black people in British 19th-century culture.