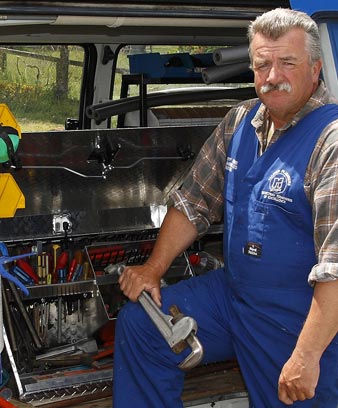 Carpenters, stonemasons and bricklayers were in high demand as towns and cities developed in colonial New Zealand. When electricity and town water supplies were introduced, electricians and plumbers were also needed.

Main image: Plumber and his van

Before steel tools were introduced by European explorers, Māori used adzes made from rock to work wood and build houses and canoes. European carpenters first arrived with missionaries in the early 1800s. As towns grew, carpenters, bricklayers and stonemasons were needed to construct buildings.

Early houses were designed and constructed by carpenters and builders, usually from wood, using hand tools. From the 1860s framing, weatherboards, doors and window frames were produced in sawmills, making it quicker to build a house.

From 1840 masons built stone buildings in Auckland. Otago had more stone houses than other areas because building stone was available locally. Most masons also worked as builders, or made monuments and gravestones. In the 20th century concrete became common and there was less work for masons.

Early commercial buildings were often made from bricks. Bricklayers also lined wells and tunnels, and built chimneys for wooden houses. In the 1848 and 1855 earthquakes many brick buildings in Wellington collapsed, so people rebuilt in wood, sometimes with a brick front.

Gasfitters installed early street and home lighting, which used gas. People cooked on coal ranges, but from the 1880s some began to use gas stoves instead.

Early electricians worked on tramways, public buildings and factories. Few homes had electricity until the 1920s – but as electricity became common, there was plenty of work for electricians, sometimes called ‘sparkies’. They had to be licensed.

Early plumbers mainly worked on roofing and pipes to keep water out of buildings. As town water supplies were introduced from the 1870s, plumbers piped water into homes and used coal ranges to heat water. The first toilets installed by plumbers used water to flush away waste, but until sewers were built it went into a cesspit (hole in the backyard). From 1912 all plumbers had to be licensed.

Tradesmen were involved in setting up New Zealand’s first trade unions. Carpenter Samuel Parnell was the first person to fight for and win an eight-hour working day, in Wellington in 1840.

Today many tradespeople are self-employed or work for small companies. Building trades have always been male-dominated.

Print the full story
Next: Page 1. Early construction Next