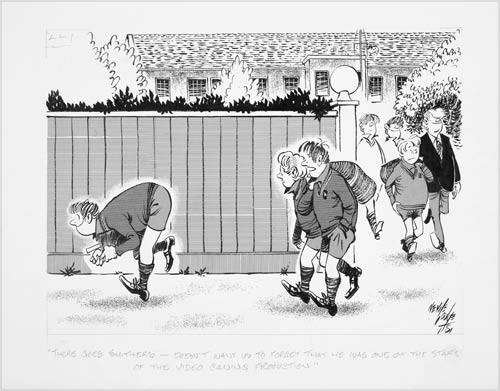 In 1981 the principal of Wellington boys' school Rongotai College videotaped pupils being caned so that, he said, he could work out why the cane often hit the wrong body parts – blows were supposed to land only on the buttocks. A concerned parent brought the matter before the school board and it received a lot of local newspaper coverage. Most students and parents supported the principal's actions, and though he was censured by the board for videotaping canings, no formal proceedings ensued.

The caption on this cartoon reads: 'There goes Smithers – doesn't want us to forget that he was one of the stars of the video caning production'.