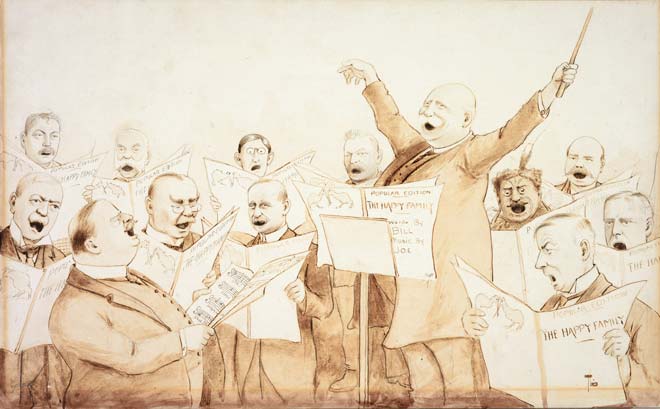 In August 1915, a year after the declaration of war, the two major political parties – Reform and Liberal – came together to form a coalition government with Reform leader William Massey as prime minister and Liberal leader Joseph Ward as minister of finance. 'Bill and Joe' were subsequently a duo who travelled together overseas to conferences during and immediately after the war. This cartoon by Trevor Lloyd shows the coalition cabinet singing 'The happy family' with 'words by Bill and Joe'. Those portrayed are: (back, from left to right) William Herries, William Fraser, Josiah Hanan, William Macdonald, Māui Pōmare and Robert McNab, and (front, from left) George Russell, Joseph Ward, James Allen, Arthur Myers, William Massey (as choirmaster), Alexander Herdman and Francis Dillon Bell.

Raising the Union Jack in Samoa