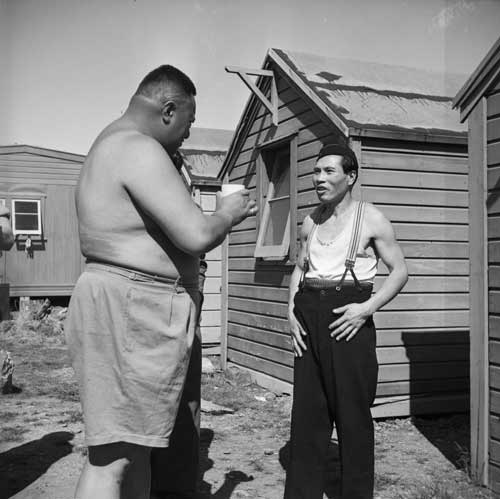 During the Second World War in September 1942, at the request of the US military, an internment camp for Japanese army prisoners of war was established at Featherston, near Wellington. Pictured here are a Māori guard and one of the prisoners. By 1943 the camp held about 800 Japanese, mostly captured in the South Pacific. While many accepted their situation, some refused to work, and in February 1943 they went on strike. This sparked a tragic incident where armed guards opened fire on the prisoners, killing 31 instantly; 17 died later. Below is an account of the event.

The Japanese never did invade New Zealand, despite widespread fears. But in 1942–43 the New Zealand government brought in 868 prisoners of war from Guadalcanal. The first group were mostly civilians who had been drafted into the Japanese navy. Later, captured or injured military personnel were also interned.

They were taken to a prisoner of war camp at Featherston, north of Wellington, where they were set to work weeding, planting and making furniture. Years later in his memoir The path from Guadalcanal (Auckland: Outrigger, 1979, p. 64), naval officer Michiharu Shinya described Lieutenant Colonel Donald Donaldson, the camp commandant: ‘[He] was a lean figure, and a man of few words and chilly manner, a character ever so much the stamp of an English gentleman’.

The earlier arrivals generally accepted their lot, but some military prisoners regarded capture as the ultimate disgrace – the belief that it was deeply shameful to work for the enemy was instilled in childhood. Rather than return home as outcasts, they refused to work. Some wanted to commit suicide and on one occasion pressured officers to ‘give us a lead’. A Japanese lieutenant told them that Japan needed them, but that he respected their position. At this point, the men did nothing.

On 25 February 1943, however, a group of about 240 staged a sit-down strike in their compound, refusing to work. Armed guards were brought in. One lieutenant, Adachi, refused to come out of the compound, and sat with his men. They demanded a meeting with the commandant, who instructed his adjutant to get them back to work.

Accounts vary on what happened next. It is believed that the camp adjutant shot and wounded Adachi. The Japanese then rose, either starting to rush or seeming about to rush at the guards. Although there had been no order to shoot, the guards opened fire with rifles and sub-machine guns as the Japanese threw stones and moved towards them.

The shooting lasted about 30 seconds. Thirty-one Japanese were killed instantly, 17 died later, and about 74 were wounded. One New Zealander was killed and six were wounded.

A military court of enquiry exonerated New Zealand, but acknowledged the fundamental psychological and racial differences between captor and captive, and the lack of a common language. The Japanese government did not accept the court’s decision.

After the war, the first prisoner of war to return to Featherston burned incense at the site in 1974. In a joint project with the Japanese, a memorial ground was established in 1976. Shuriken, a play about the incident by Vincent O’Sullivan, was performed in 1983. In 2002 the artist Robin White exhibited 12 panels depicting what was left of the camp.

The tragedy remains a testimony to cultural misunderstanding. Today, a plaque commemorates the site with a 17th-century haiku:

Behold the summer grass All that remains Of the dreams of warriors.

Hi all, My grandfather was an army officer at Featherston. My mum is going to visit Featherston in Feb2017. Any tips on memorial sites, places of interest, historical society? We have beautiful animals and walking sticks given to my grandfather by the Japanese prisoners. Mum wd like to share some photos of them with any local historians and learn more about Featherston. Can anyone point us in the right direction? Cheers, Elisa. Email- [email protected]

Having been born in 1936, I was five years old when the Japs bombed Pearl Harbor. I call them "Japs" because, following the sneak attack, ALL Americans were encouraged to call the Pacific enemy by that name and we children, terribly frightened by stories -- later proved to be true -- of what they were doing to their prisoners, needed little encouragement. Today there are many who were not alive during those fearful times and who consider themselves authorities on "racism." There may well have been racism during WWII (and afterwards) but the enemy produced their share of it. We Americans would have hated anyone who behaved as the Japs and the Huns (Germans) did. It is easy to be a "bleeding heart" if you did not have to live through the fear.

The haiku is beautiful!

The haiku is beautiful! Apparently it was written by Matsuo Bashō, a famous Japanese poet of the 1600s.

A note re 'The Path from

A note re 'The Path from Guadalcanal', the memoir of Michiharu Shinya... this book was revised and updated, and published as 'Beyond Death and Dishonour' by Castle Publishing Ltd (Auckland) in 2001. As of 2011 it is still in print and available from the publisher.

David, first of all, you

David, first of all, you sound way too racist. The word "jap" is racist, please use the correct description "Japanese". Not to mention that this particular page is about Japanese chapter in New Zealand. All the histories you've mentioned above are true but none of it has got to do with Japanese-New Zealand history does it? War makes victims on both parties David. Yes, they were POW’s (some were NZ citizens who never participated in the Pacific war) which means they were soldiers who was trained or would have killed our allies. (Not to mention that during the Pacific war all most all American-Japanese were moved to such camps as well.) The point I want to make is that the post-war SHOULD brings us closer to humanity. David, no matter who STARTED it. Read the haiku David, don’t you feel sorrow for the souls that were lost? Ask any Soldier, the last thing they want is to die in a foreign country in a POW camp. The war is bad enough and is a disgrace of humanity, to make it worse, some still have racist emotions which does nothing to comfort the pain. This leaves the scars of war everlasting.

The Japs must have suffered

The Japs must have suffered similarly a cultural misunderstanding when they tortured, worked to death and executed Allied POW's, and natives in the Island, and Asia. The Rape of Nanking was obviously all a misunderstanding. Why not comment on the Japanese nation's militarism and obesquious servitude?