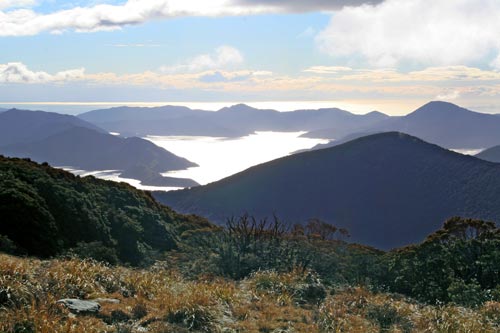 Ngāti Kuia first settled in the Pelorus area and then spread out across the Marlborough Sounds, Nelson and Tasman districts to Taitapu on the West Coast, and as far south as the Nelson lakes. This view looking west over Pelorus Sound is from Parorangi (Mt Stokes), the highest point in the Sounds and a place of considerable significance to the tribe.

Ngāti Kuia’s historic treaty claims were settled on 23 October 2010 at a total cost of about $25 million. Eight sites totalling about 16 hectares were vested in the tribe, which was also given the opportunity to purchase certain Crown properties.

Parorangi is the mountain, Te Hoiere is the canoe, Raukawakawa is the sea, Matua Hautere is the person, Kaikaiawaro is the taniwha, Ngāti Kuia is the tribe.

E ngā mōrehu pakiaka ora o te whenua (the surviving roots of the land), Ngāti Kuia are one of the largest and oldest iwi of Te Tau Ihu in Te Waipounamu (the South Island). Ngāti Kuia tradition states that their founding tupuna Matua Hautere, a descendant of Kupe, came to Te Waipounamu in his waka Te Hoiere, guided by the kaitiaki (tribal guardian) Kaikaiawaro. Matua Hautere’s descendants settled there and married into local iwi, migrating into the Pelorus area, which they named Te Hoiere after their waka. Ngāti Kuia is an amalgamation of descendants from Matua Hautere and the Kurahaupō iwi of Ngāi Tara, Ngāti Tūmatakōkiri, Ngāti Wairangi, Rangitāne, Ngāti Apa and Ngāti Māmoe. Eventually Ngāti Kuia communities settled in a number of locations across Te Tau Ihu, including the Marlborough Sounds, the Nelson and Tasman districts, Taitapu and Lakes Rotoiti and Rotoroa in the south.

Ngāti Kuia were renowned fishermen and harvesters of tītī (muttonbirds). They were known as iwi karakia (spiritual people) in relation to their natural environment. Ngāti Kuia are the workers of pakohe (argillite), which they traded with other iwi as far away as Horowhenua and Wairarapa. The Ngāti Kuia tupuna (ancestress) Hinepoupou is credited as being the first woman to swim Cook Strait, in her epic swim from Kapiti Island to Rangitoto (D’Urville Island).

Ngāti Kuia met early European explorers like Cook and supplied food and goods for the settlement of Nelson when it was being established. They encouraged settlement in Te Hoiere in a deed of sale with the Crown, and left their pā at Motuweka so the town of Havelock could be built there.

Ngāti Kuia have continued to survive through the ages and the turbulent times of natural and man-made disasters. They continue to live in Te Tau Ihu today, from Te Hoiere through to their other traditional customary areas. The iwi’s affairs and assets are managed by Te Rūnanga o Ngāti Kuia Trust. Ngāti Kuia-associated marae are at Te Hora (Canvastown), Whakatū (Nelson) and Omaka (Blenheim).

hhmmm where can i find

hhmmm where can i find information on Ngati Kuia??? I need it for my school Maori assignment or ill get in HUGE trouble.....:(