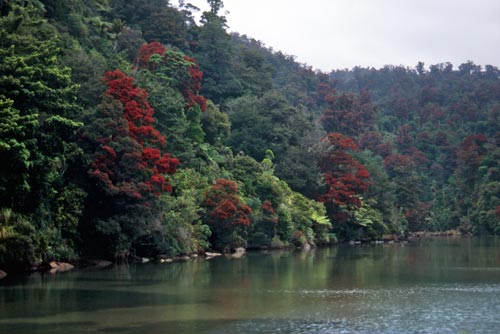 When they migrated south in the 18th century, Ngāti Apa first settled in the Marlborough Sounds region. In the early 19th century they defeated Ngāti Tūmatakōkiri and took control of Golden Bay and western Tasman Bay. Whanganui Inlet on the west coast, a tidal inlet ringed with flowering rātā, is at the centre of their area.

Ngāti Apa ki te Rā Tō settled its historic treaty claims on 29 October 2010, at a total cost of $28.4 million. Sites of particular cultural significance at St Arnaud, Te Tai Tapu (West Coast), and Port Gore were returned to Ngāti Apa without provision for future public access. The Alpine Tarns and Lakes Rotoiti and Rotoroa in Nelson Lakes National Park were vested in Ngāti Apa and gifted back to the Crown.

Ngāti Apa ki te Rā Tō is the name that distinguishes those of Ngāti Apa descent who migrated to Te Tau Ihu o Te Waka a Māui. They settled in the outer reaches of Tōtaranui and the western Pelorus region (Anamahanga or Port Gore), Tarakaipa Island and Te Awaiti, and other localities in the Marlborough Sounds and Golden Bay, Tasman Bay and the West Coast hinterlands as far south as Māwhera Valley (Greymouth). The iwi are so named because they journeyed towards the setting sun.

On arrival from Hawaiki, Kurahaupō people (including Ngāti Apa) settled in the Hastings district. After a few generations, they migrated to the west coast of the North Island, and ultimately came to control much of the southern North Island between Rangitīkei and Cook Strait.

From the mid-15th century, Ngāti Apa’s journeys and forays to Te Tau Ihu and the West Coast, occupied at the time by Ngāti Tūmatakōkiri and Ngāti Māmoe, began to increase in both frequency and scale.

Along with Rangitāne and Ngāti Kuia, Ngāti Apa began to establish permanent settlements in the Queen Charlotte Sound region from about the mid-18th century. Conforming to custom, they began assimilation and intermarriage with Ngāti Māmoe – a process which legitimised and maintained their rights.

By the late 1760s Ngāti Apa occupied the outer reaches of Tōtaranui to Anamahanga in the western Pelorus region, Tarakaipa Island and Te Awaiti. They shared other localities in the Sounds with Ngāti Kuia and Rangitāne.

Today, their rohe (tribal area) extends from the southern end of the Paparoa Range on the West Coast, northwards along the coast to Farewell Spit then onward to Nelson. It reaches inland to Mt Ryall, Ikamatua and Maruia Springs, and to the Nelson lakes region, encompassing Lakes Constance, Blue, Angelus, Rotoiti and Rotoroa, to the Top House and into Nelson via the Gordon Range. In the Marlborough Sounds it extends to Anamahanga.