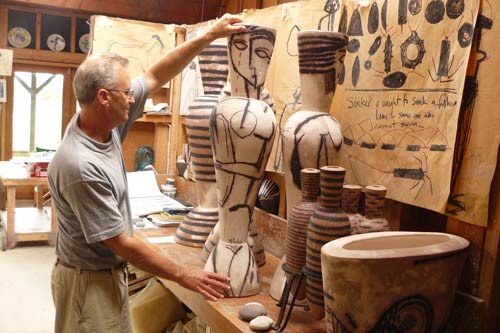 Anne and John Crawford set up Hector Pottery – one of the pioneering craft workshops on the West Coast – in 1974. John talks about his background and influences.

Both sets of grandparents lived and worked at Denniston, a coal-mining settlement high on the hill above Westport. My father was a coal miner and I grew up in Rūnanga, a small village surrounded by bush and shining creeks. At Rūnanga Primary School we had a progressive head teacher, a Mr Hart, who showed us Len Lye films like ‘Colour box’. The effects of the colour and movement still remain in my memory today.

Yvonne Rust, a pioneer ceramic artist, taught art at Greymouth High School. She was a great influence on me and inspired my love of ceramics. The old brewery that she converted into her studio was always filled with artistic people. Here I met many practising artists such as Olivia Spencer Bower and Theo Schoon. To make and draw seemed to me to be my only option. One does not choose to be an artist, it chooses you.

In 1974 we set up our own studio in Hector on the West Coast. Establishing a studio in a small rural town would never be easy, and we were initially regarded with suspicion. However, we have now been around long enough to be considered part of the community.

Solitude is a most essential and valued element in the creative process, as it allows for the formation of concept free from outside influence. We have found the coastal village of Ngākawau (which means the resting place of shags) a wonderful place to work.

From our studio we can watch the West Coast’s dramatic weather change and challenge.

Here in this place you get the feeling of being squeezed between the mountains and the sea, held safe by the constantly changing shell of the sky. A sort of natural tension that makes its way into the work.