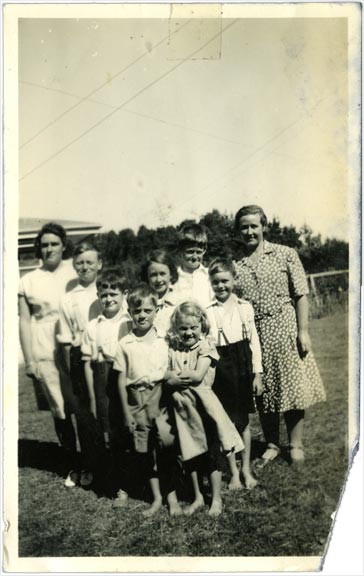 In 1947 Helen Hirst spent a year as a sole-charge teacher on a farm called Manahune, at Waipara, North Canterbury. Helen (left) and Mrs Thomson (right) are shown with the pupils of Manahune School in 1947.

The Manahune homestead sat on a terrace overlooking a gully with a creek running through it. The classroom itself was what had been the family dining room. There were nine children – seven boys and two girls – and their classes ranged from primer one to standard six.

My year at Manahune was a great experience, and I learned many things. I found I could be firm, as long as I was fair, and that it was no good trying to bluff myself out of a tricky situation. I got more respect if I admitted I had made a mistake or simply said I didn’t know. There were never enough children to make up teams to play sport, so our outside activities usually took the form of a hike along the valley or beside the creek, or up and over the high hills around us.

It took quite a while to get used to the classroom being in the house where I now lived, and I was very conscious of Mrs Thomson (Tommy) working away in the kitchen through the wall. We would hear cupboard doors banging and pots rattling and the occasional burst of song from her as she prepared our midday meal. At five minutes to 12, on the dot, the little service hatch in the wall would slide open, and Tommy’s cheery face would appear, surrounded by steam from the pots on the stove below.

Every Friday I biked down the valley to the Waipara station and caught the train home. Returning to Manahune after one weekend I began to feel very unwell and developed the mumps. My parents came and took me home until I recovered. I returned to school and had two days teaching before all nine children came down with the illness. Then Tommy’s neck began to swell and she became very sick. As if that wasn’t enough, it began to rain, and rain, and rain, and the creeks became flooded and overflowed and we became cut off.

It was a very unnerving situation. Instead of being a teacher, I had suddenly become a nurse in charge of a mini hospital, and one of my patients was very ill. Tommy’s face was like a big red balloon, and she tossed and turned in her bed, and every now and then she broke into a song about ‘The old bull and bush’. I thought it was time to ring the family doctor who lived in Amberley, and when he heard my story he said he would come and see her.

Two hours later there was a knock on the door, and when I opened it, there he stood, dripping wet and very cold. He had had to leave his car down the valley and walk, wading through the flooded creeks to get to us.

I was so glad to see him I could have flung my arms around his neck and hugged him. I made him a cup of tea, and then I took him to his patient who was still sporadically bursting into song in the bedroom. After examining her he told me she would start to recover in a couple more days. He left some medicine before leaving on his long walk back to his car.

Tommy’s health slowly improved, and so did the children’s. In dribs and drabs they returned to the classroom. In the third term the school inspector came to spend the day. He must have liked what he saw, because he gave me a good report, and when I applied for Training College the next year, I was accepted.