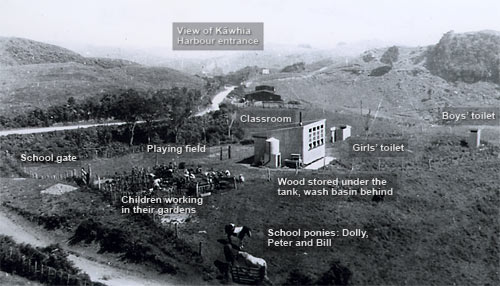 This photo of Waiharakeke School, south of Kāwhia Harbour, shows its features in the 1940s, when Mrs Eileen Shaw was a pupil.

Chores
An important aspect of the country-school experience was helping out with chores around the school. Children weeded the gardens, cleaned classrooms, and, as Mrs N. Johnson recalls, cut newspapers into squares for the outside toilets. Some even helped with the teaching. Mrs G. Peddie, who attended school at Nukuhau North in the Bay of Plenty, writes, ‘In 1939 I was in form 3 receiving lessons from the Correspondence School in Wellington. I helped the teacher with the primer classes. He would go though what he planned for the day’s lessons with me.’

Another job was making cocoa for morning tea. Mrs Eileen Shaw, who attended Waiharakeke School south of Kāwhia Harbour in the 1940s describes this enjoyable task: ‘We all brought our milk from home. As a senior student it was my duty to boil the milk over a primus stove for cocoa. As dairy farmers supplying a butter factory, it was a sense of pride to have the most cream on the top of the milk bottle.’

Agricultural clubs
Calf Club and school garden projects were part of a country child’s education. Mrs Peddie has memories of these at Nukuhau South School: ‘Once a week for an hour in the afternoon the older classes had gardens. Under the guidance of the teacher we tended our plots. Besides the physical part we were encouraged to keep a record of our work and our garden’s progress. Calf Club Day at the end of the year was the climax to four to five months of daily diligence in preparing our calves. We usually started with the calf as soon as we could after its birth. Sometimes after it had been weaned from its mother it was necessary to bottle feed it for a while. We had to groom it, teach it to lead, come when called and generally behave. Like the gardening project we were required to keep a record of what we did and the day to day of our calf’s progress. On the “big day” the calves were taken to the school to be judged by local breeders. I still have certificates from 1938/39.’

Remembering school days
Our correspondents look back on their country school days with pleasure. Mrs Peddie writes ‘This may seem a hard life to children of today, but we didn’t think so’. Mrs Johnson says ‘Working together, caring and sharing, helped the children to understand life.’ Mrs Dawn Beattie agrees: ‘Kids, unwittingly, were taught all things that they would need in their life ahead. To be responsible for themselves and others; to be trustworthy, honest.’