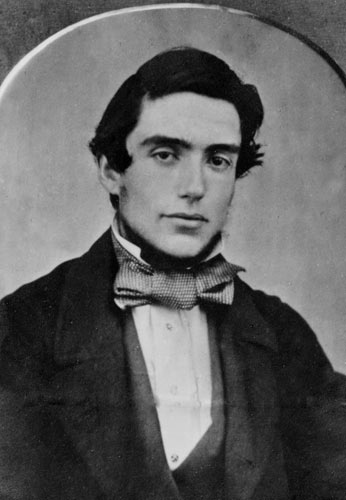 George Denton emigrated from Yorkshire on the China in 1855. Inventive, entrepreneurial and with a great sense of fun, he whiled away the 19 weeks of shipboard life by taking classes in French, organising musical concerts, rigging up a filter to sell fresh water, learning to sew and cook and cutting passengers' hair for a 'moderate' fee.

From the hills and dales of Yorkshire he came to Wellington, a town being reclaimed from the sea. It was 1855. He sailed on the China, leaving Gravesend on 1 September and arriving 19 weeks later.

George shared a cabin with three others.

During the voyage the passengers saw porpoises, whales, albatrosses, sharks and dolphins and once caught a starfish with a pail.

The stench from stagnant water and the livestock became overpowering. Thirteen dead fowls, a sheep and eight pigs were thrown overboard, and he wrote, ‘If they do not kill the rest they will be sent to the British Museum to be classed amongst skeletons.’

Rations such as meat, flour, rice, tea, and coffee were distributed: ‘I cut up a shirt to make bags for flour.’

Passengers, in pairs, prepared meals to be cooked for four. George wrote, ‘The best way to learn to cook is to have your dinner dependent on your skill. It is my lot to be cook and housemaid next week. We are all going to take cooking lessons.’

Menus featured in his diary – passengers dined on suet pudding, boiled pork, ham, meat pie, pea soup, jam dough, and rice pudding: ‘We have worked out a good recipe for bread. The ship’s biscuit is very hard but tolerably good. During the last week bread and cheese have disappeared mysteriously. All was clear this morning. Mr Hare lay in watch and caught the Butcher in the act of helping himself.’

‘Water needs filtering, but by adding raspberry vinegar and other additions it is more palatable.’ Later George made a filter out of a tin bottle, a piece of sponge and some charcoal. ‘Now we have water as fresh as from a spring – and plenty of customers.’

They were becalmed in the tropics: ‘No one wears waistcoats or coats, and some sleep on deck. The pitch is melting. It is something like getting into a brick oven when bread is taken out.’

‘I tried my hand at washing and succeeded well with towel, flannel and handkerchief.’ More washing raised blisters. Sailors charge £3 for scrubbing trousers, 6 d. for shirts per voyage. My linen being old is not worth the expense. Cannot get it a good colour but with salt water and no professional abilities I manage well.’

‘Today I measured out a distance, walked back and forth, two miles before dinner.’

‘Two of us are learning French in spare time …’

‘Last night we held a concert – violin, flute, flageolet and a comb with paper ...’

‘I was given a tattered copy of The Pickwick Papers and have bound it together … and now after a sewing lesson I have made a cap ...’

‘We are nearing land and our cabin boasts a sign: “Hair cutting and shaving: charges moderate”.’

George Denton was my great-grandfather, and his descendants continue to be innovative and imaginative.

Amazing history. Also he is

Amazing history. Also he is the most handsome man I've ever seen.