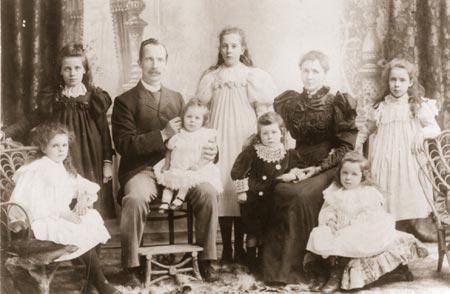 George Grant came to New Zealand from Scotland as a single man in 1877 with hopes of becoming a Presbyterian minister. However he had to remain a lay preacher, becoming a teacher, not a minister, after an argument over the plush seats in St Andrews in Wellington. George is pictured here with his wife Jane (née Duthie), and their children Christina, Frances, Kathleen, Dorothy, John, Nora and Florence, not long before his death from peritonitis in 1900. Jane was left to raise the children alone.

George shared a six-by-nine-foot cabin with three other single men, who remained on remarkably good terms throughout the voyage. Everyone experienced seasickness, but shipboard life seemed to settle quickly into routines. George spent most of his time studying Greek, Latin, and at times, algebra and shorthand, and writing articles for The Zealandia Times. Passengers held concerts; George offered recitations and readings.

The beauty of sunsets, the moon rising on the water and the ‘spirit of enquiry that prevails among the passengers’ inspired this Scottish evangelical Presbyterian who hoped to train for the ministry in New Zealand. His diary entries report conversations with both sailors and fellow passengers about the state of their souls.

Five weeks into the trip, the ship crashed into another in the middle of the night. Running on deck he saw a mast tossing in the air, as the barque Ellen Lamb sank in a creaking of splinters, as the noise of the sea gave a hideous sound. The baker was found cowering in the lifeboat. Four perished.

The Zealandia was badly damaged. Next morning everyone, including passengers tried to patch it, while sharks circled the ship. A roster of passengers maintained the pumps all night but the sailors got drunk, the apprentice struck the captain and in the chaos a mast yard came down.

Six weeks after leaving London, they entered Rio de Janiero for repairs. Ships of many nationalities lay in the harbour. During the month in this city the single men revelled in the fresh fruit, meat, gardens and architecture beyond the harbour.

Leaving Rio, everyone was seasick again in rough conditions. George found the sea glorious in its majestic fury: ‘No stranger can well understand the grandeur of this mighty part of creation hissing, seething and roaring as wave after wave dashed over the bulwarks of the ship raising her quite out of the water at the bows, anon plunging down into a watery chasm.’

Soon a passenger was found to have smallpox. Everyone feared catching it and now they would have to endure at least two weeks of quarantine before disembarking in Wellington.

Temperatures dropped. Days were tiresome, the decks seldom dry. They looked out for ice constantly. When the baker also became ill with smallpox, George and his cabin-mate attempted to make bread.

Smallpox took the life of the quartermaster, whose decomposing body was buried at sea. Weary and worn after five months on the journey, they at last caught sight of ‘Queen Charlotte’s Sound and Cape Egmont’. Gales pushed them down the coast towards Kaikoura but on 26 October they entered Wellington Harbour with the yellow flag hoisted.