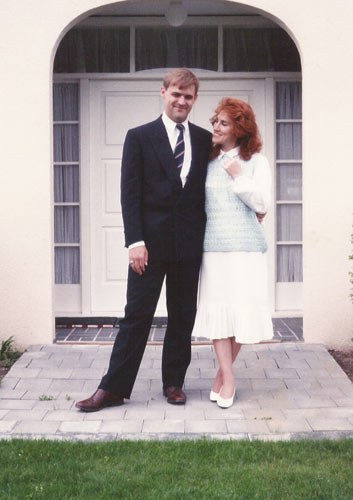 During their journey from Canada, the Cawstons (pictured in 1994 on the steps of their Christchurch home) discovered that Andrew’s passport had expired for immigration purposes and he would not be permitted to land in New Zealand.

In late May 1994 my Kiwi wife and I decided to emigrate to New Zealand from Canada. We had been married three years and things weren’t working in New Westminster, where we lived in a rented house.

Over the next month we said our goodbyes, packed our bags, sold up a few sticks of furniture and an automobile. By mid-July 1994 we were on an airplane, with most of our possessions in our checked baggage; a couple of immigrants with no jobs and a couple-of-hundred dollars in our pockets each.

My intention was to set up a business upon landing, or get a job – whichever came first. Emigrating to a new country, leaving everything behind and ‘burning your bridges’ has a way of clearing your mind. It is truly motivational and I would recommend the experience to everyone. Everyone should be an immigrant at least once in their lives.

When we landed at Auckland International Airport, we discovered – to my horror – that my passport only had 10 days before it expired! Not enough for international travel!

The immigration official was a small, fussy and officious fellow and he herded us into a holding area, where we waited and waited and waited. Our expectation was for me to be sent back on the next plane to Canada. So it was with some trepidation that we awaited his return – which he eventually did:

‘Mr Cawston, your passport is not valid for international travel. So I cannot allow you to land.’

Here it comes, I thought …

‘These are temporary papers that are good for 10 days only. I suggest that, immediately on your arrival in Christchurch, you contact the Canadian Embassy in Wellington and have them produce a new passport for you. They will do so on an emergency basis, probably. Then take these papers, with your new passport, to Immigration in Christchurch, and be landed. Have a nice life in New Zealand.’

I could hardly believe it. He was gone before we could say thanks.

Nearly 10 years later, my wife and I are still together, two kids, two cars, a mortgage and a nice house. All the things we could not achieve in Canada. I got a job almost immediately and have never been unemployed since, never needed a benefit, and have always paid my taxes.

New Zealand has been a great country for us. This is now home, and we are never going back. And to this day I think about that officious immigration officer, and how he did a truly decent thing for our family. If I could somehow thank him today, I would; his was an act of great kindness that I will never forget.