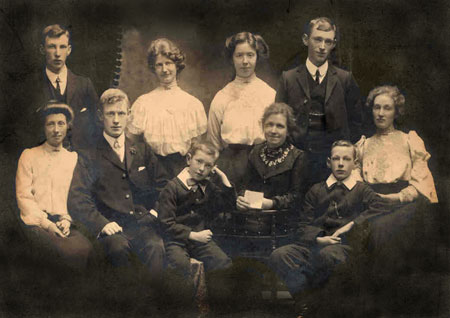 Charlotte Wykes (née Dallow) is pictured in the centre front row, holding papers, with her family. She was just four years old when her family emigrated from England. Her parents managed to keep her alive with food they brought on board. Years later her daughter Gertrude (front row, far left) wrote this account.

This account by Gertrude Frost (née Wykes) was sent in by her granddaughter, Jill Langdale-Hunt of Howick

Grandfather (Isaac Dellow) and Grandmother (Mary Gapes) lived in Bromley, London. Grandfather worked in a distillery, earning 18 shillings per week. They had six children under 12 years of age and the baby was six months old. Bread was a shilling per four-pound loaf and other things were relatively dear; life was not too easy. Grandmother had two brothers, twins, James and William Gapes. She also had a sister, Mrs Hannah Prosser, whose husband was a farmer in north Canterbury and who had migrated to New Zealand some years before. There was also another sister, Charlotte – Mrs Joshua Page – who followed in later years. Her husband took up livery stables in Christchurch and later in Timaru.

The brothers and sister would sometimes write urging Grandfather and Grandmother to come out to New Zealand, where there were greater opportunities. So, being directed to Mr Isaac Philpott (who had come out in one of the first four ships), they gathered together all their belongings and what money they could get and set out on the ship Regina.

The voyage took 13 weeks and was a most uncomfortable experience. The food on board was both meagre and poor and had they not brought some food of their own, they would have fared badly. Ship’s biscuits, bully beef and preserved potatoes were the chief items of diet, and Grandmother said our mother, Charlotte, aged four years, nearly starved. She would sit with her finger in the corner of her mouth and say, ‘I can’t eat “serbed taters” (preserved potatoes)’, but her parents kept her up after the others were in bed and fed her on the food they had brought with them, and she managed to survive. After a dreary 13 weeks they arrived in Lyttelton on 6 December 1859.

From the ship they were taken to the barracks at Lyttelton where they spent their first night. The next morning, having hired a dray and team of bullocks, they loaded up their belongings. Grandfather set out on the journey to Christchurch over Evans Pass into Sumner, taking the small children, Charlotte and two-year-old James, with him. The oldest girl, Ann, aged 11 years, had been taken to Aunt Hannah’s. So Grandmother, carrying the nine-month-old baby William, along with Mary, aged ten years and John aged eight, set out to walk over the rough track over the hills known as the Bridle Path.

’Twas terribly hot and they made slow progress. They had been warned not to drink water they might find in the hills as it would make them ill so, seeing a house in the distance, the two children went to ask for a drink of water, while Grandmother sat on a large stone and rested. After some time they returned with another child, carrying what turned out to be a plate of delicious pancakes and a jug of the very nicest tea Grandmother ever tasted. Thus refreshed and encouraged by the kind thoughtfulness of the unknown settler, they plodded on. From the hill top, the Canterbury Plains looked very desolate and uninviting, being swamp and raupo and some stretches of tussock; very few trees, except a little bush about Papanui; nothing home-like about it.

Trudging on past Heathcote, they reached the river near what is now known as the Ferry Bridge, but there was no bridge then. They had to be ferried across the river, where they were to wait for Grandfather to return from Christchurch with the dray and bullock team to take them the rest of the journey. They waited and waited, glad to sit and rest, but there was no sign of the team along the track and not a soul to be seen. It was nearly evening and they must have felt very desolate when Uncle John called out, ‘Here he comes Mother, I can just see them’.

Arriving at last at the Emigrant Barracks on the corner of Armagh Street where Cook & Ross now stands, they spent the night there, glad of the food and rest.

The next day a man Mr May (later of May’s Road, St Albans) arrived with a dray and team of bullocks to direct them to Mr Philpott’s farm at Harewood. There was a general store in Colombo Street where Armstrong’s is now and they bought the things they thought they would need there. Their purchases almost complete, Grandmother said, ‘Oh, I must have a scrubbing brush.’ Mr May laughed, ‘You won’t want a scrubbing brush, Mrs Dellow’, but she bought one just the same.

After another slow tiring journey, by way of the track through the swamp and flax which is now Papanui Road, they at length neared the end of the journey. Grandfather pointed with his whip, ‘Yonder’s the house, Mother’ and Grandmother’s heart sank to her boots. ’Twas nothing but a shed in the bare riverbed, not a tree or other habitation, and she soon saw why she did not need a scrubbing brush, for there were neither floor, windows nor door. Just a shell without partition or stove, bare and desolate.

However, they set to work and cooked a meal with what they had brought with them, improvising a stove from an oil drum and putting up a sail cloth which was round a packing case for a partition, and utilising packing cases for tables and seats. Of course they soon had things more ship shape when the windows and doors arrived, but for some time they had only an earthen floor and when at last they put down floor boards, these being of green timber, soon shrank, so that there were gaps an inch wide between the boards and many small articles like combs and keys were irretrievably lost.

As soon as they could, they got a colonial oven to replace the oil drum. This was a large iron box set on bricks, under which the fire was lit, with the door opening out and downwards. Cooking pots, kettle and frying pan were suspended from hooks held by chains from an iron bar in the chimney and many a good meal was cooked on one. Firing was a difficulty and generally consisted of drift wood (brought down by the Waimakariri River), which Grandmother and Uncle John lugged home on their backs. But one winter they burned nothing but straw, driftwood being very scarce. Grandfather would bring the straw into the house in sacks and twist it into tight wads in the long winter evenings, ready for cooking with.

Privations and hardships were many, among them the difficulty of getting boots for the family. When word would come (by bush telegraph) that there was a shipment of Cockham boots in Christchurch, the men would get to town by any means they could and with all speed, sometimes jumping from one nigger-head [clumps of sedge] to another, across the swamp to make a short cut, before the boots were all sold out.

After some years at Harewood, by dint of hard saving, they acquired a farm at Templeton of about 120 acres. There were many ups and downs over the years. They paid £70 for a team of bullocks to start with, and two of these died in the first year. Then caterpillars destroyed almost the whole of their best grain crops.

It was because of the plague of caterpillars that sparrows were first introduced and before long they minimised the caterpillars. At one time the caterpillars were so bad they derailed the train (which had just started running on the south line), by making the rails slimy. Eventually the railway was to prove their undoing as they would get into the deep embankment alongside the line and could not get out.

By this time there were four more children born to the family, all girls, Martha, Elizabeth, Jane and Emma. Of course there were no public schools then, and children learned to read and write as best they could. As the girls of the family grew old enough, they were eagerly sought after by the settlers for the help they could give. Transport before the train was established was very meagre and Grandmother would sometimes have to walk 12 miles into Christchurch, carrying her eggs and butter into market and to see how her girls were faring. She would sometimes get a lift in a bullock dray if she was lucky, for no one dreamed of passing another traveller on the road in those days who was journeying by foot.

At length Grandfather’s health began to fail, so they decided to let the farm and retire to St Albans where they bought a house and a few acres of land on the corner of Innes Road and Toon’s Road (now Thames Street). There they kept a cow or two, a few pigs, and also a horse and trap. I remember Grandmother’s lovely flower garden and Grandfather’s strawberry beds in particular.

The oldest son, John, was dedicated to the Methodist Ministry and the other sons, James and William, were apprenticed to the blacksmithing and wheel-wrighting trades, later setting up in business at Mayfield, where a township ultimately sprang up around them. James made the first plough share in Canterbury.

As Grandfather’s health deteriorated further they moved to Crescent Road, where Grandfather died in 1890 at the age of 68. All the family being married, Grandmother took me to live with her for company and I heard this story told many times from her lips. At my marriage in 1902, she went to live with Aunt Emma for a time and later on with Uncle Jim at Mayfield, where she died in 1909 at the age of 84. She left nearly 100 immediate descendants.