Adventures on the Dauntless 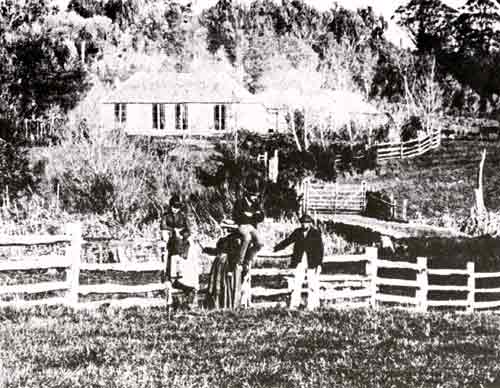 Members of the Crawford family pose outside their property, ‘Glen Fern’ in Mauku, in 1868 – three years after an eventful sailing to New Zealand on the emigrant ship Dauntless.

Maggie Crawford, at the age of two, found it difficult to understand the commotion that was taking place at home in Belfast, and the reasons her parents were eternally engrossed with preparations for a long sea voyage. New Zealand and the Waikato Immigration Scheme meant nothing to her, but to her parents, being accepted as assisted immigrants to settle in a new land on the other side of the world caused wild excitement.

There was only one problem; they had four children under five and the rules stated no more than two were allowed at that age. Luckily they met Mr and Mrs McChrystel, who had also been chosen. As they had no children, they were willing to take Maggie and her little sister Anna under the McChrystel name.

The Ulster emigrants were to travel on the ship Dauntless. It embarked at Kingstown, the port for Dublin, and sailed for Auckland on 31 December 1864, with Maggie and Anna travelling under false names.

Most of the 400 emigrant passengers had not been to sea. Maggie’s father was one of the exceptions, as he had served overseas with the British Army in the Crimean War. Many were filled with excitement and a certain degree of trepidation. For the children, setting sail on the sea was an awesome experience, impossible to forget. Conditions were very cramped and the food soon became monotonous. The air down below was stale, which did not help those succumbing to seasickness. After a few days most adjusted to the privations and made themselves as comfortable as possible in preparation for a non-stop voyage of 135 days.

The Dauntless proceeded east of the Cape Verde Islands, but when rounding the Cape of Good Hope problems started for Captain Moore. A number of crew and a few of the passengers threatened to kill the captain and take the ship into the Cape on the pretence that the vessel was not seaworthy, and because of dissatisfaction with their accommodation and food. Captain Moore extracted a consignment of rifles from the hold, armed his officers, and placed three mutineers in irons.

The Dauntless continued on course, passing the southern tip of Tasmania on 18 April and Stewart Island on 25 April. Heading northwards, the Dauntless came upon the ship Fiery Star with its cargo of wool on fire. Its chief officer and 17 crew had fought the blaze for 22 days and lost all hope of bringing the fire under control. The captain, some crew and most of the passengers had abandoned the ship in lifeboats and unfortunately were never seen again. The Dauntless removed the remainder of the crew from the burning ship, just a few hours before she sunk. Whether Maggie actually witnessed this incident is difficult to say, but she would refer to it throughout her life, whenever the voyage of the Dauntless was mentioned.

A few days later the Dauntless arrived in Auckland, on 15 May 1865. Maggie and the rest of the family had survived the journey, but unfortunately Captain Moore, who had not been well during the latter part of the voyage, died shortly after arrival.

The family lived for a year in a raupo hut, erected by Maggie’s father, and a baby brother (William) was born. The Crawfords were then allocated an allotment of land in Patumahoe and later moved to Mauku where Maggie grew up. She married in 1886 and lived most of the remaining 95 years of her life in Waiuku.

awesome this has made very

awesome this has made very interesting reading thank you .. My Great great Grandfather came out on the Dauntless his name was Adam Girven married Harriet Rebecca Ball who he met on the ship ..we have a huge family now and we are arranging a Girven Family Reunion in 2017 Regards Cathy