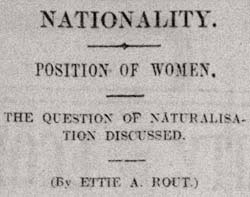 Until the 20th century married women did not have independent citizenship rights. On marriage, they took the nationality of their husbands. In the early 20th century, women’s organisations sought independent nationality for women. In New Zealand the issue was raised by the early activist Ettie Rout, who wrote this article for the Lyttelton Times in 1915. She questions the disadvantages that married women faced in respect of their nationality. By mid-century the principle that women had their own nationality was firmly established.