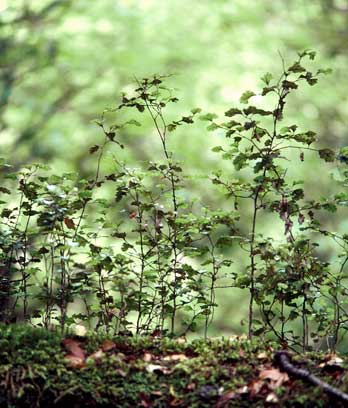 In a temperate country, plants are quick to take over an empty area – whether it’s the result of fire, a landslide, a volcanic eruption or a retreating glacier leaving gravels in its wake. Hillsides covered in scrub are a familiar sight in New Zealand. Mānuka, kānuka, bracken and gorse are some of the first plants to grow on cleared land, setting the stage for forests to regenerate.

After soil is cleared, it is soon covered with weeds. Later, shrubs appear, and then trees grow.

A similar process happens in New Zealand’s forests. One group of plants is replaced by another group over time. This is called plant succession.

Sometimes plants start growing on a surface that has no soil on it, such as ash from a volcanic eruption, or gravel left behind by a glacier. At other times, plants take over an area of soil that has been cleared of vegetation by fire, a landslide, or a storm.

Most plants can’t live on a surface without soil, because they need nitrogen from the soil. But some plants can take nitrogen from the air and change it into a form they can use. These ones – including brooms, tree tutu, kōwhai and gorse – appear early. Over time, their leaves and roots die and help to make soil. Then, larger plants can grow – often kāmahi and southern rātā trees. Later, big conifers grow up through this forest.

The first plants in a cleared area are called pioneer plants. They grow there because they are specially suited to the conditions.

The next stages: a new forest

After bracken, mānuka or gorse take over an area, they grow into a thick cover. Underneath this, native plants get started. As the pioneer plants become older and die, native trees (often kāmahi) grow up through the gaps. Later, bigger trees grow up between these ones.

Print the full story
Next: Page 1. Forest succession Next