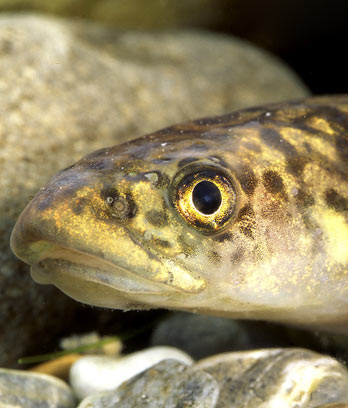 The cigar-shaped mudfish can survive for months out of water, hidden in river debris. Some whitebait can climb up steep waterfalls, and they have no scales. New Zealand’s freshwater fish are few but fascinating – and also very shy. Lurking in small streams, they are seldom seen.

Do you know how many different native fish live in New Zealand’s lakes and rivers? Most people think of trout and salmon, but these are not native to New Zealand. It’s quite a surprise to learn that there are about 40 species, including whitebait, smelt and mudfish.

One reason why people do not know much about New Zealand’s native freshwater fish is that they are seldom seen. Many are quite small, and some have spots for camouflage. They are very shy, hiding under river banks, or among boulders and stones on the river bed. Often they live in small streams or pools.

Some are found throughout New Zealand, while others live in just a few places.

The biggest family is the galaxiids. The name refers to their silvery-gold spots, which look like stars in a galaxy. They can swim very fast in short bursts. In this group are:

Other freshwater species are bullies, smelt, grayling (extinct), torrentfish, lamprey and black flounder. Bullies are small fish that you might see near the shores of a lake.

Most species are nocturnal: they only come out to feed at night. One way to see what is in a stream is to shine a torch into the water at night.

Kōaro and banded kōkopu are amazing climbers. When young they can slither up high waterfalls by clinging to the rock with their fins. If caught, they can climb out of buckets, or up the damp glass wall of an aquarium.

Links to the ocean

Nearly half the species spend some of their life at sea. They migrate between rivers and the sea, mostly in spring and autumn.