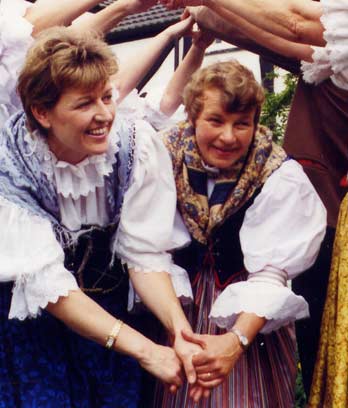 To be independent and free – in the 19th century this desire brought thousands of Germans to the other side of the world. Scientists, musicians, businessmen and missionaries made their mark and for a time, authentic communities sprang up. The many recent arrivals have, once again, come in the pursuit of freedom and happiness.

Between 1843 and 1914 around 10,000 arrived, mainly from northern Germany. Control by rich landowners, compulsory military training and harsh censorship made life difficult at home. One happy settler wrote to his family, ‘Things are good here in this colony’.

From the 1840s to the 1860s, German immigrants established several rural communities. Ranzau was one of several villages around Nelson, where settlers introduced winemaking and planted orchards. Pūhoi was a well-known settlement north of Auckland, built by Bohemians. Their traditional folk tunes are still played there.

In the 1860s, hundreds came to Westland in search of gold.

A decade later thousands were brought in to help create the new nation – clearing land, felling trees and building railways. They settled around the country. For a while, there was a Germantown in present-day Waimate and another near Gore.

Immigration stopped with the First World War. During the two world wars German residents were treated with fear and suspicion. Some were imprisoned as enemy aliens on Somes Island, near Wellington.

Across the country, the pioneer settlers had a significant impact. Among them were scientists, musicians and brewers.

Around 1,000 German refugees, mostly Jewish, fled to New Zealand in the 1930s and 1940s. They were escaping the horrors of Nazi Germany. By the 1950s a number of them were leading figures, from artists and academics to doctors and lawyers.

In the 1990s the biggest wave of German immigrants arrived, continuing into the 21st century. Unlike the early settlers, they were mostly white-collar workers. But they too looked for a better life, in a ‘clean and green’ land.

Print the full story
Next: Page 1. First arrivals Next