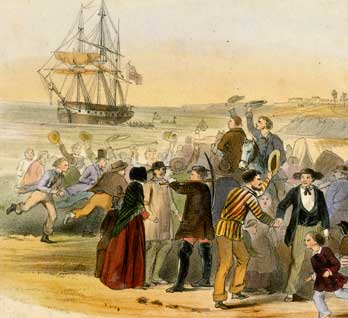 Moving to another country is a big decision, especially when it means a long and dangerous journey. New Zealand’s immigrant stories over the last 200 years tell of people escaping a difficult past, or lured by promises of a better future.

Main image: Settlers on the beach

Clubbing seals in a cave

For over 150 years after 1800, most people who migrated to New Zealand were from Britain (England, Scotland, Wales) and Ireland. Yet for them, New Zealand was the most distant place on earth. The journey by sea took 100 days, and voyagers endured rough seas, cramped conditions and illness. Unless they were offered free travel or other rewards, many people were reluctant to emigrate.

Some came because they had already reached Australia as convicts or settlers. Those who went the extra distance across the Tasman Sea included:

Others came because they received assisted or free travel on ships from Britain and Ireland. These included:

Some also came as a result of war – soldiers brought out to fight in the New Zealand wars of the 1860s, or war brides who came with New Zealand soldiers who had fought overseas.

Until the Second World War most came from Britain. Some other groups were:

After the Second World War

In the 1950s and 1960s more people were helped to migrate. They included many Dutch and a larger number of English and Scots.

From the mid-1960s on, people began to come to New Zealand from Samoa, Tonga, the Cook Islands and other Pacific islands, attracted by work opportunities.

In 1975 and again in 1987, New Zealand changed its immigration policies to admit people on the basis of their qualifications and not their race. Since then there has been a large flow of immigrants from Asia, and some from Africa.

New Zealand has become much more multicultural. In 2006 about 67 out of 100 New Zealanders had an exclusively European background. The others had Māori, Pacific Island or Asian ancestors.

Print the full story
Next: Page 1. Early years Next