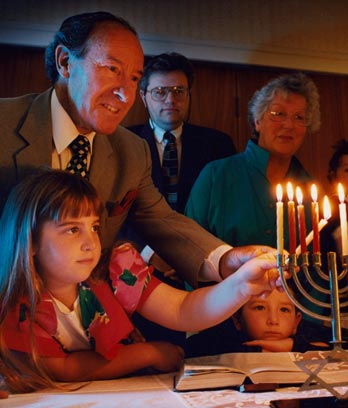 Whether seeking a better life or fleeing for their lives, Jewish immigrants have brought to New Zealand a passion for education, a devotion to family and communal survival, and a strong social conscience.

The first Jewish synagogues were built in Hokitika, Dunedin and Christchurch in the 1860s. These synagogues were a declaration that, although they were few in number and distant from the world centres of Jewish life, New Zealand Jews were determined to maintain their culture, religious rituals and customs.

Jewish people were prominent in the early business communities of many towns and cities. The children of merchant families achieved distinction in such varied fields as the arts, medicine and law.

In the 19th century Jews were active in political and public life. Many became mayors, and Julius Vogel, who was twice New Zealand’s premier, became one of the country’s best-known political leaders.

The number of Jews in the country increased in the 20th century. From before the Second World War, some Jews who were fleeing persecution by Adolf Hitler in Europe made it as far as New Zealand. These immigrants, who included musicians and educators, were among the Europeans who made New Zealand society and culture more lively.The movement of Jewish refugees to New Zealand continued, particularly from Russia, until late in the 20th century.

During the 20th century many New Zealand Jews supported Zionism (the movement for the return of the Jewish people to Israel, and for Jewish leadership of that country). Some idealistic younger Jews left for Israel. But Israelis have also more recently come to New Zealand, escaping the political violence of the Middle East. Jews were also among the South Africans who emigrated, especially in the 1990s, in search of a more peaceful life in New Zealand.

Print the full story
Next: Page 1. 19th-century immigration Next