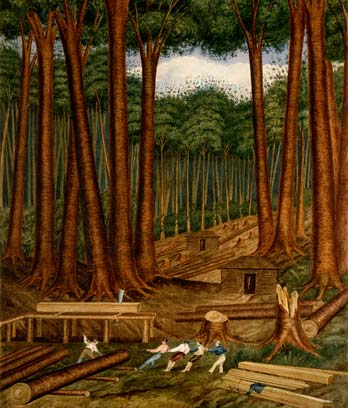 Giant kauri trees were considered by Māori to be the kings of New Zealand’s forest. The straight-grained wood was prized by Europeans as spars for sailing ships and became popular in construction. With logging, tracts of native forest soon dwindled. Today the patches that remain are being carefully protected, and the forest is being restored.

Kauri is a native New Zealand tree that grows in the warm, northern part of the country – Auckland, the Coromandel Peninsula and Northland. It is one of the largest and longest-living trees in the world. Kauri can live for 1,000 years or more, and its trunk can be over 2 metres in diameter. The trunk is greyish, with a pattern caused by the bark falling off in flakes. The long leaves are bronze when young, and turn bright green as the tree grows.

The kauri is a conifer: it produces cones, which release pollen (male cones) or seeds (female cones). Kauri gum oozes from mature trees to repair injury or decay.

Kauri forest often includes many other tree species. Full-grown kauri trees stand above a canopy of smaller trees, such as rimu and nīkau palms, and they may be draped in lianes (woody twining plants). There are tree ferns and orchids, and close to the ground are shrubs such as kauri grass, found only in kauri forest.

Kauri thrive on poor soil. This means that they do not have to compete with other trees, which need more fertile conditions.

Māori valued kauri because of its size and for its gum, but did not find its wood as useful as some other species. Because the wood floated, logs were carved out to make waka (canoes). The first Europeans to visit New Zealand in the late 1700s found that kauri timber was ideal for shipbuilding and other construction. Logging began, and by the mid-1800s sawmilling was a big industry. Large amounts of kauri gum were dug from Northland’s swamps and sold overseas, for use in varnish and linoleum.

Because kauri was so sought after, by 1900 most of the forest had been cut down. Only a few patches remained. Possums have also been a threat, stripping the trees for food. Today, kauri forest is protected and new trees are being planted.

Print the full story
Next: Page 1. How and where kauri grows Next