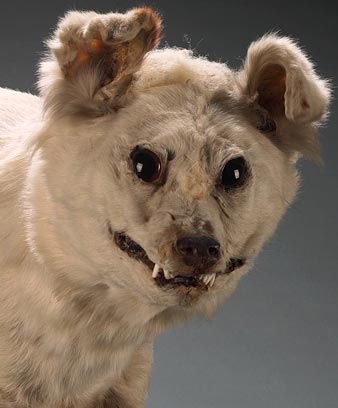 A vital source of protein and fur, the sturdy kurī was also a favoured pet of Māori chiefs. Ancient accounts tell of dogs turned to stone, ghostly barking, and supernatural beings in the form of kurī.

Kurī were a kind of dog that is now extinct. They were brought to New Zealand on canoes by the ancestors of Māori, who travelled from Polynesia in the 13th century.

The dogs were long-haired and quite small, with short legs and a bushy tail. Some were black, some white, and some a mixture of colours. They did not bark, but howled – the Māori word for the sound was ‘auau’.

The guardian (deity or god) of kurī is Irawaru. The demigod Māui was angered at his laziness, and while he was snoring, Māui pulled his ears, nose and back into the shape of a dog.

It is said that the Polynesian explorer Kupe brought dogs with him to New Zealand, and left one dog waiting so long in Hokianga Harbour that it turned to stone. In another account, a dog jumped from the Tokomaru canoe at night, and guided it to New Zealand’s shores by howling.

Two stone kurī were said to haunt Lake Taupō. If people in canoes mistook their noise for real dogs and called out to them, a storm would arise and they would drown.

When did kurī die out?

It is unclear when kurī became extinct. They probably became rare through cross-breeding with dogs brought by Europeans from the early 1800s, and then disappeared altogether.

Print the full story
Next: Page 1. What is the kurī? Next