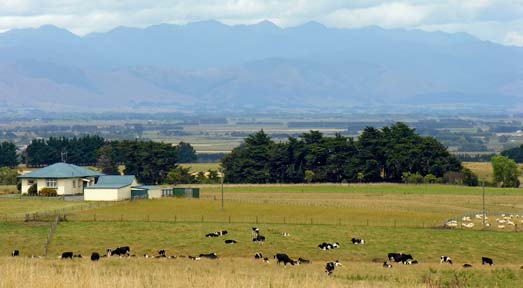 Manawatū and Horowhenua are heartlands, their towns surrounded by rich farm country. The low-key lifestyle contrasts with the powerful natural forces that have shaped the region – from the breathtaking Manawatū Gorge to the curious anticlines where land is being folded into hills.

Landforms of Manawatū and Horowhenua

The Manawatū–Horowhenua region lies between the North Island’s main mountain range and the west coast. It stretches south from the Rangitīkei River to the Kāpiti district. Manawatū is the northern part and Horowhenua the southern part.

The main mountains are the Tararua and Ruahine ranges. The Manawatū River cuts a spectacular deep gorge between these ranges. It has also formed plains, which were once swamps covered in flax and other native plants. The river sometimes floods, causing massive damage – most recently in 2004.

Sand dunes, some horseshoe-shaped and over 30 metres high, stretch along the coast. This dune field is one of the largest in the world. Behind it lie lagoons and lakes, the largest being Lake Horowhenua.

The Rangitāne and Mūaupoko people of this region lived along the coast, near rivers and by lakes.

In the 1820s the Ngāti Toa and Ngāti Raukawa tribes attacked from the north. The local people suffered badly, but the Ngāti Raukawa chief, Te Whatanui, shared land with other tribes and helped to make peace.

Europeans first lived mainly along the coast. Foxton was the only town in the region.

After 1870, more Europeans arrived. Scandinavians and other pioneers cleared the inland forests for farmland. Many worked at sawmills, on roads or railways, or were ‘flaxies’, making fibre from flax.

When the flax trade ended, sheep and dairy farms made Manawatū rich. Palmerston North became a city, and Levin and Feilding grew. Massey Agricultural College opened in 1928, and several scientific research centres were set up.

The region grew more slowly from the 1970s. But with Massey University and other learning centres, it has become important for education and research. It also has bases for New Zealand’s army and air force. From its mountain tops, wind farms produce enough power to supply 70,000 homes – more than any other New Zealand region.