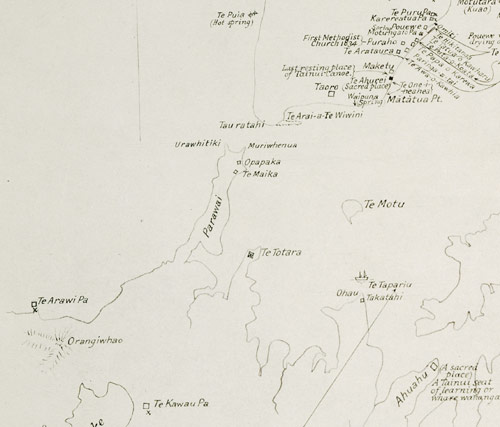 In the early 1820s Ngāti Toa were attacked by a combined force of Ngāti Maniapoto and Waikato tribes and forced to retreat to Te Arawī pā, before leaving the Kāwhia area completely. It was at Te Arawī that Te Rauparaha composed a famous lament, bidding farewell to the Ngāti Toa homeland and ancestors. The lament mentions some of the places marked on this map of Kāwhia, including Te Motu, an island in the harbour; Muriwhenua, an undersea burial cavern; and Te Kawau, an offshore rock at the harbour entrance that marked the entrance to the burial cavern.

The tides of Honipaka, I now depart. My spirit still clings To the cloud Above Te Motu. You stand apart from me. I now leave my precious homeland In this unexpected parting.

I bow in tribute to those who have passed: Sleep on in that endless sleep. The tides rise, standing, flowing, Rising. Carried away with this, unrelenting, Te Kawau at Muriwhenua.

There is my bird, my cherished bird, Held captive in this house, the imminent new year. By the house of mourning,

By Te Āti Awa, Travelling in company, I shall bury all my sorrows.