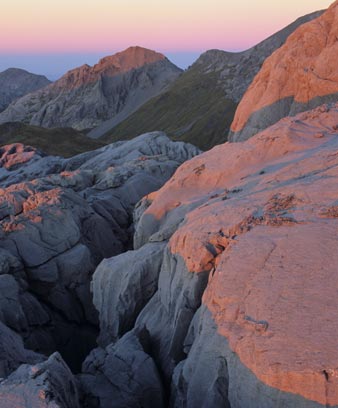 Awesome peaks and volcanoes loomed large in Māori life and tradition, and have challenged climbers and inspired artists. The snowy, deeply incised Southern Alps and the Kaikōura ranges form the South Island’s backbone – a mountain axis that continues in the North Island. Many of these grand landscapes are now protected in national parks.

Highest peaks of the Southern Alps

The country’s highest mountain is Aoraki/Mt Cook, which is 3,724 metres high.

In the far south, the Fiordland ranges have steep-sided valleys plunging down to deep, narrow fiords.

The best-known mountains in the North Island are all volcanoes. The three highest are:

Quite often, ash is erupted from Mt Ruapehu and Mt Ngāuruhoe. Ruapehu’s most recent eruption was in 1995–96. The biggest eruption in the last 200 years was of Mt Tarawera, near Rotorua, in 1886. Over 100 people died.

A long chain of mountains runs through the North Island, from Wellington to East Cape. It includes the Tararua and Kaimanawa ranges.

The lower mountain slopes are covered in native forest. Above this are shrubs, and then tussock grasses. Still higher, in the alpine zone, are cushion plants or herbfields. Many of these plants have white and yellow flowers.

Native species living in the mountains include:

In Māori tradition, mountains are places of great awe. Many tribes have a sacred mountain that is important to their identity.

Snowy landscapes have often featured in New Zealand paintings and photographs. Poets have written about the atmosphere of the mountains.

In the 1880s, climbers began to tackle the highest mountains. Ruapehu was first climbed in 1886.

The first ascent of Aoraki/Mt Cook was on Christmas Day 1894. Today, about 500,000 people visit the mountain each year.

There are many walking tracks and huts in the mountains, and you can go hunting, fishing, kayaking and mountain biking.

Print the full story
Next: Page 1. South Island mountains Next