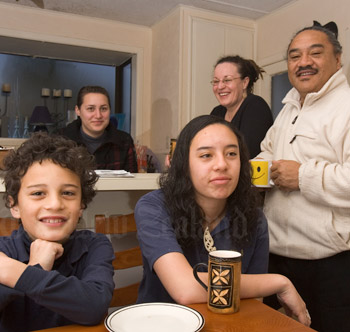 Early European visitors noted Māori children being indulged by their parents and leading carefree, playful lives. Children were seen as the responsibility of the whole whānau, not just of their mother and father. In the 21st century Māori were reviving traditional parenting practices such as oriori (lullabies) and mirimiri (massage).

Early European visitors noted that Māori parents were very kind to their children, and seldom hit them. Children were indulged and led a carefree, playful life.

Traditionally a whānau was 20–30 people. They had their own compound to live in, and often their own gardens and places to hunt and fish. They were self-sufficient in most ways. Children were seen as the children of the whole whānau, not just of their mother and father.

Over time the whānau has changed. Households are smaller, and whānau may be geographically scattered. People also work longer hours. Parents have less access to support and advice from grandparents, aunts and uncles, and other whānau members.

Whāngai (adopting or fostering children) is an important concept for whānau. People often raise nieces, nephews, cousins and other family members as their own children.

Māori women typically have children at a younger age than Pākehā, so they are less likely to have higher educational qualifications, a secure income and a stable relationship. However, younger mothers have fewer complications during pregnancy and birth. In 2013 around one-third of all Māori households were single-parent households. Māori also earned less than the average income.

Children benefit from being part of a wider whānau, and having close relationships with their grandparents and other whānau members. Today some people are reviving traditional parenting practices such as oriori (lullabies), mirimiri (massage) and rituals.

Print the full story
Next: Page 1. Parenting in tradition and history Next