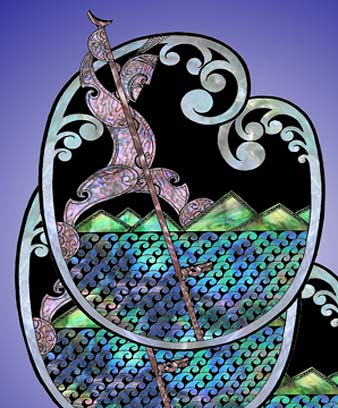 Māori traditions tell of many great journeys of exploration around New Zealand. The earliest arrivals from Polynesia sailed around the coast by canoe. Later, people headed inland on foot, discovering and naming rivers, mountains and other features.

‘The legend of the voyage to New Zealand’

When Māori first arrived in New Zealand, they sailed along the coastline in canoes. Later they explored coastal and inland areas, mainly on foot.

There are many traditions about early Māori explorers. Tribes often used these to establish their rights over areas of land.

Some stories explain how natural features were made. In one, the volcanoes and hot pools of the North Island were created when the priest Ngātoroirangi climbed Mt Tongariro. He was freezing and called for help from his sisters in the Polynesian homeland of Hawaiki. They sent fire to warm him.

Kupe explored much of the coast, and many places are named after him.

Some of the first canoes to come from Polynesia explored the coastline. They included:

Rakataura was the priest of the Tainui canoe. In Auckland he argued with the canoe’s captain, Hoturoa, and went travelling south down the west coast. Later he married Hoturoa’s daughter.

After Kahupekapeka’s husband died, she explored much of the Waikato with her son. They climbed and named many mountains – for instance Te Aroha-o-Kahu (the yearning of Kahu).

Haunui travelled down the lower west coast of the North Island, chasing his wife, Wairaka, and the man she had run away with. Haunui named the Rangitīkei, Manawatū and Waikanae rivers. At Pukerua Bay he turned Wairaka and her lover into rocks.

Tamatea was one of New Zealand’s greatest explorers. He travelled around much of the North and South islands, and was called Tamatea-pōkaiwhenua (land explorer) and Tamatea-pōkaimoana (sea explorer).

South Island tribes made ‘greenstone trails’ for moving pounamu (greenstone) from west to east across the island, to trade with tribes from the North Island.

Print the full story
Next: Page 1. Exploration traditions Next