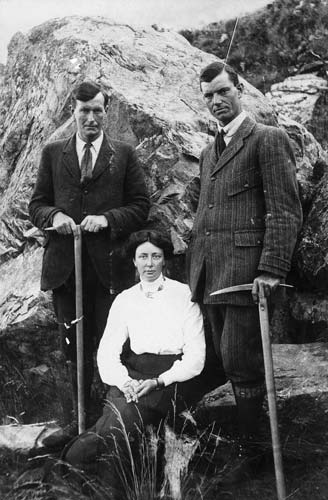 For 40 years from the mid-1890s alpine climbing was dominated by professional guides. Among the most famous were the Graham brothers. Alec (left) was based at Franz Josef Glacier and Peter (right) became chief guide at the Hermitage in 1906. Guides like the Grahams took clients on expeditions through the central Southern Alps. The Australian Freda Du Faur (centre) was often guided by the Grahams. Alec and Peter were with her when she became the first woman to climb Aoraki/Mt Cook in 1910. Peter also guided her on the first traverse of Aoraki/Mt Cook’s three peaks in 1913.