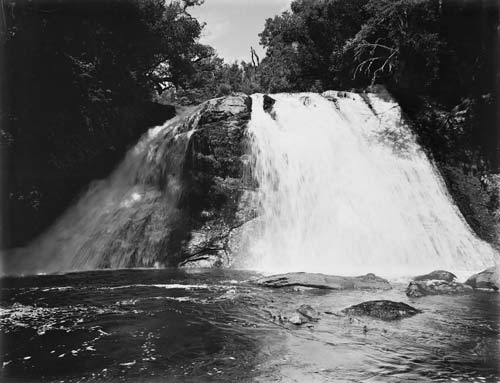 This is the lower of the two drops in the Āniwaniwa Falls near Lake Waikaremoana. It is called Te Tangi-o-Hinerua – the weeping of Hinerau, a highborn Tūhoe woman who lived beneath the Huiarau Range and was famed for her beauty. When gathering food from the bush she was trapped between a chasm and a cliff by an earthquake. To summon help she threw a blade of flax with an ornament attached into the river. Losing hope of being rescued, she began to cry. Her tears grew and became a torrent that rushed over the rocks of the chasm, forming a waterfall. Her flax blade eventually floated into Lake Waikaremoana where Te Toru, a Ruapani chief discovered it. Te Toru went upstream, rescued Hinerau and later married her.