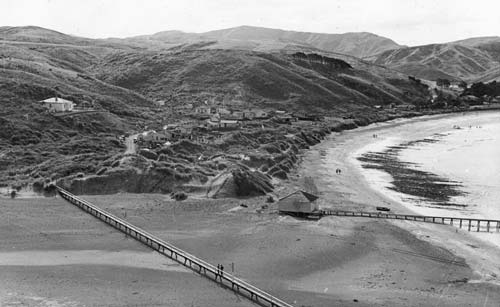 In the 1920s, Castlepoint had a long jetty (right), built in the 19th century when the settlement was Wairarapa’s main port. The jetty was later smashed by heavy seas and not replaced. The building to its left is the store. The causeway on the left was built to ensure access to the lighthouse even in bad weather or high tides. Over the years it was washed away and rebuilt a number of times – for the last time in May 1985. In 2008 a storm uncovered damaged piles and it was removed.