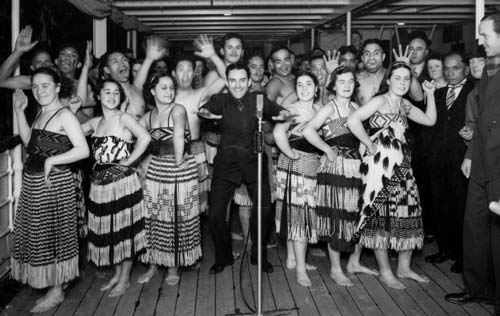 In the early 1900s, there were few Māori living in Wellington. Numbers increased after the First World War as Māori began moving to the city from the country. This led to the formation of the multi-tribal Ngati Poneke group to provide for their welfare. In 1937, the group set up the Ngati Poneke Young Maori Club to promote Māori culture in the city. It soon formed a kapa haka (traditional performing arts) group, which staged concerts around Wellington and New Zealand. Here they perform on the promenade deck of the ship Wanganella, around 1937. The microphone stand suggests the event was broadcast on local radio station 2ZB.