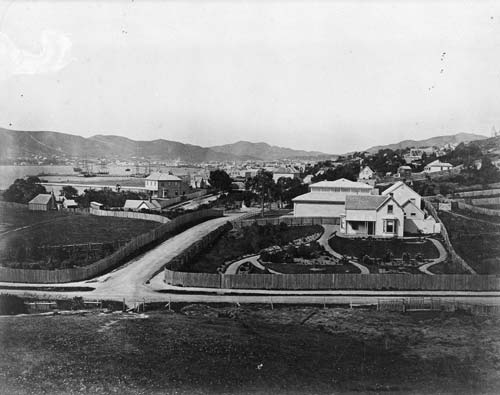 The Colonial Museum on Museum Street (now immediately behind Parliament Buildings) was the centre of scientific study in Wellington in the late 19th century. William Skey worked here when he undertook the first analyses of New Zealand soils in 1868.

In 1868 James Hector reported on the first analyses of New Zealand soils, made by William Skey. Skey was optimistic that all the soils he analysed had high levels of plant nutrients, but later work showed that not all elements are freely available to plants.

Attention is requested to the following instructions by persons contributing samples of soils to the Colonial Museum for the purpose of being chemically analysed:

1. The quantity transmitted should be not less than 6lbs weight of surface soil, 2lbs weight of sub-soil. 2. The surface-soil should be selected free from roots and undecomposed vegetable matter, and of uniform quality, gathered in several equal portions from different parts of the field, and from 2 inches below the surface. 3. The sub-soil should be taken in the same manner from a depth of 12 inches. 4. Small specimens of iron pan, sole, or other concretionary bands that may occur in the soil, should be forwarded in a separate parcel. 5. Each sample of soil should be carefully secured in a calico bag, distinctly marked “surface soil” or “sub-soil”, and also with the name of the contributor and a number, the same number being used for corresponding samples of surface and sub-soils. 6. A copy of the enclosed form, distinguished by this number, must be filled up with the required particulars, and transmitted along with the specimen it refers to. 7. Parcels and letters are to be addressed “On public service only. Specimens for Analysis. Dr Hector, Colonial Museum, Wellington”.

N.B. Under no circumstances will an analysis be made of a specimen, unless the necessary information is supplied, and properly authenticated by the signature of the contributor.