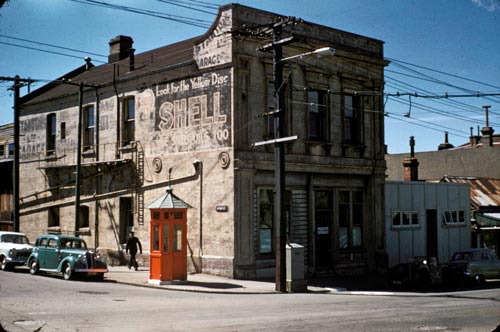 This building at 54 Molesworth Street, Wellington, was the headquarters for the DSIR Soil Survey (later called Soil Bureau) from 1940 until 1962. It was in poor condition after being damaged during the 1942 Wairarapa earthquake. After a building inspection revealed that the large collection of soil samples stored in the attic exceeded the strength of the rafters, the samples were hurriedly moved elsewhere.

It was hard to describe the building as anything but an eyesore. During the royal visit in 1953, it was covered in bunting to disguise it.

The New Zealand soils portal website may be of use to you. It contains soil analyses, descriptions, maps, and the national soils database: https://soils.landcareresearch.co.nz/

Dear Sir/Madam, I am in

Dear Sir/Madam, I am in possession of a NZ Soil Bureau publication written by D M Leslie in 1984 ( NZ Soil Survey Report 75 ) "Soils of Koronivia Agricultural Research Station, Viti Levu, Fiji" . I am currently working on an MFAT funded project _ Fiji Dairy Industry Development - managed by Prime Consultants. The work relates to the Koronivia Research Station where D M Leslie would have worked. Is he/she contactable through NZ Soils Bureau still ? Their soils work is incredibly useful and I have some questions relating to several of the soil types, as we are promoting forage growing for silage to improve the feed quality ( MJME) for the general Fijian Dairy Industry. If you could either send me their contact details ( e mail / ph # ) or ask them to contact me directly to my gmail address, I would be most appreciative. My phone number is 03 5410969 or 021521840 . Thank you. Leith Pemberton