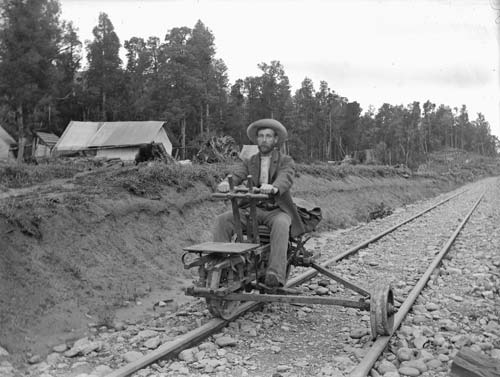 It was the year 1934. Every Sunday afternoon, weather permitting, we three girlfriends cycled to the timber mill outside Greymouth, hid our bikes behind blackberry bushes, scrambled over the five-barred gate on to the old railway jigger, and whizzed blissfully into another world.

The mill was absolutely out of bounds to the public on Sundays – and there was a huge notice saying so. As for the jigger, if we were found out we’d be in real trouble. But at 15, that was the most enjoyable part of the exercise – the delicious fear of being caught.

Away we rolled, the other two with their backs to the track into the bush while I faced them. We moved slowly at first, gathering speed as we got into our usual routine: past the bracken which had once fooled us into believing it was soft to fall into, over the little bridge spanning a deep hollow near the start of the track, past the manuka and ferns which grew taller and taller, and eventually in amongst the giant scarlet rata.

All was silent except for the bellbirds ringing out their clear notes, filling the bush with magic. We let the jigger handle work on its own as we ran out of puff and gazed in awe at this other-world of towering trees and birdsong. We never tired of it.

We stopped in a little clearing backed by the impenetrable forest.

We clambered down to see how far we could venture into this silent territory, but after only a few yards were brought up short by the sound of breaking branches, followed by what seemed to be stumbling footsteps.

We froze, terrified, visions of escaped criminals – perhaps murderers – swimming before our eyes. Then as the sounds came closer, we threw caution to the winds and took off at speed, crashing heedlessly through undergrowth and tree ferns till we flung ourselves back on to the jigger.

In our panic we set the jigger rolling the wrong way, losing precious seconds, but finally we started back to safety. As we gained speed, I saw over the shoulders of the others a great black bull emerging from the bush into our clearing. I almost laughed with sheer relief – not escaped criminals – but the beast saw the moving object, put its head down and thundered in pursuit.

‘Faster! Faster!’ I yelled. ‘There’s a huge bull chasing us. If we can get across that little bridge we might make it, so keep pulling!’

The beast was getting dangerously close, then mercifully the clickety-clack of the wheels deepened as we raced over the bridge. Heart in mouth, I watched the bull graunch to a stop, breathing fire and stomping the forest floor with frustration.

‘Whew! That was close,’ I gasped, as we climbed dizzily over the gate and retrieved our bikes. ‘Not a word to anyone you two or we’ll be prosecuted for trespassing – it says so on the notice. Anyhow, who would believe us? They’d say what a lot of bull.’