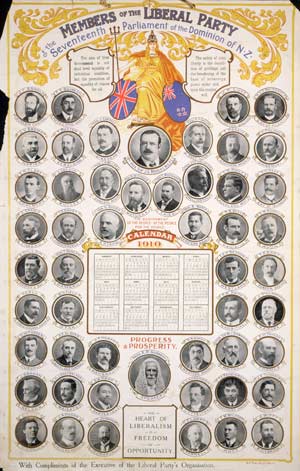 The 1890 election swept into power a group of MPs who became the Liberal Party. It proved a watershed in New Zealand’s history, as the Liberals made many reforms and changes, especially in land policy and labour relations. The Liberals remained in power until 1912. In 1910 they produced this calendar, featuring the party’s members of Parliament. By this time, Joseph Ward (centre, top) had replaced the forceful Richard John Seddon (leader of the party from 1893 until 1906) as prime minister.