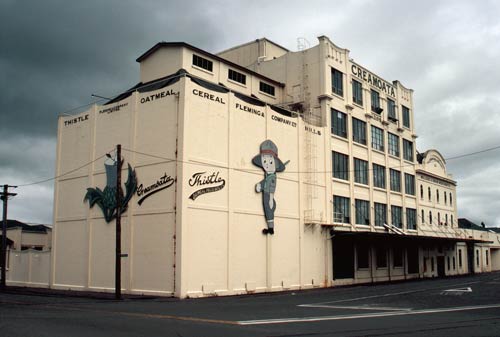 This factory was the home of Fleming’s Creamoata, an oatmeal porridge that was the staple breakfast for thousands of New Zealand children for much of the 20th century. The Sergeant Dan figure, seen here on the side of the building, was used to promote the product. The mill was built in 1919 and was closed in 2001 when the overseas owners shifted the operation to Australia.

I have a very small silver

I have a very small silver spoon with a bunch of oats on the handle,I had heard that there were small spoons dropped from and aircraft over Southland I think between the to world wars from the Creamoata factory in Gore can you verify this I could send you a photo it has flemings ENPS on the back

Is it possible to be able to

Is it possible to be able to buy creamoata porridge in Victoria.?I loved the creamoata and miss not seeing it on the supermarket shelves.It is so sad to see all our quality products disappearing .I.G.A.in Victoria try hard to source products that the giant supermarkets have crushed.I hope you can help me .Regards .Lauren Ellis .

I can not buy oatmeal from my

I can not buy oatmeal from my local supermarket. Neither are they willing to bring it in for me. Creamoata was one of the few popular and available brands of oatmeal that used to be available. Oatmeal is able to be purchased from health food shops, usually from bulk bins, but it is not of the same quality. Rolled oats is processed by heated rollers. This process I believe to be detrimental to the nutritional content of the grain.