Horses and vets at war 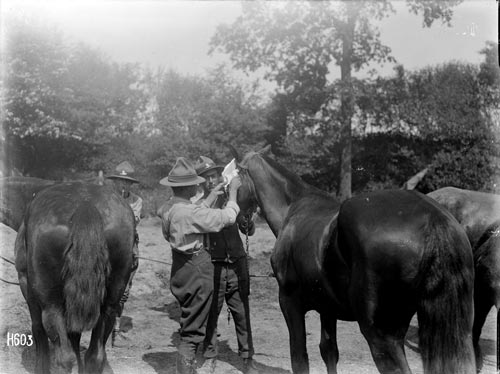 Army veterinarians bandage a horse’s eye in Louvencourt, France, in 1918, during the First World War. Horses were used extensively in the New Zealand wars of the 19th century, the South African War and the First World War – both by mounted cavalry and for hauling heavy artillery, equipment and supplies. The New Zealand Veterinary Corps was formed in 1907. When war broke out, they selected and transported nearly 10,000 horses, and set up veterinary hospitals in Egypt. In addition, a New Zealand section served at a veterinary hospital at Calais. Although New Zealand horses were highly regarded, many suffered from exhaustion, starvation, dehydration, and extremes of heat and cold. Some died from disease, injury or wounds.