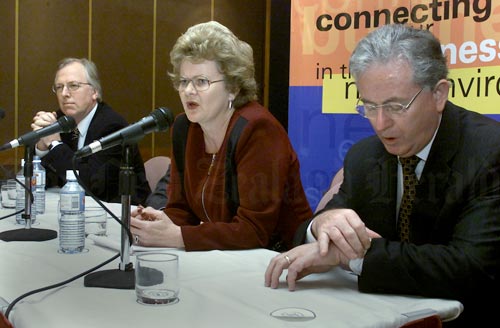 Employer organisations spend a great deal of time lobbying, advising and negotiating with government. Anne Knowles, chief executive of the Employers’ Federation from 2000 to 2003, is shown here with Minister of Finance Michael Cullen (right) and Combined Trade Unions head Ross Wilson (left) at the Manufacturers' Association employment relations conference in Auckland in July 2000. The Labour government’s Employment Relations Bill was then being discussed.

Knowles’s career illustrates the degree of government contact involved. As industrial relations executive of the Meat Export Processing Industry Organisation, she managed industry regulation and deregulation; as chief executive of the New Zealand Employers’ Federation, she worked with employment legislation and its implementation. Knowles chaired the government committee that recommended the setting up of the Equal Employment Opportunities Trust, of which she became a director, and worked with the International Labour Organization (a quasi-governmental organisation), which she joined in 2004.