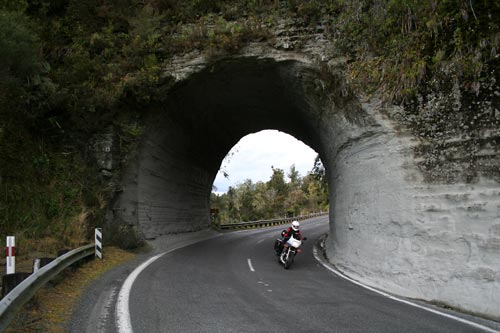 A motorcyclist heads through the tunnel on the road up Mt Messenger, south of Ahitītī. The tunnel originally opened in 1916, and was single-lane, with a sharp, gothic-looking arch. The elegant arch was lost around 1990, when the tunnel was enlarged to provide two-lane access and to allow trucks with big loads to pass through. Mt Messenger is named after Colonel William Messenger, the commander of the garrison at nearby Pukearuhe redoubt during the 1870s and 1880s.

Roadside Stories: The wars of Waitara