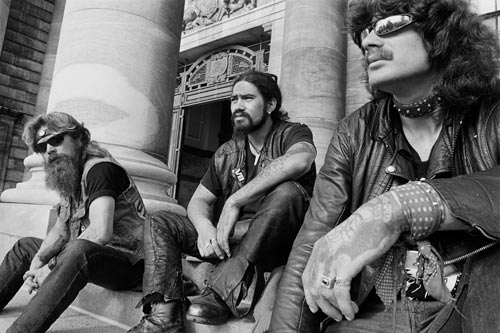 Ex-prisoner and hunger striker Tuta Ngarimu is supported by two Upper Hutt Mongrel Mob members on the steps of Parliament buildings in December 1987, as he protests against the conditions of prisoners in Pāremoremo Prison. He has just spent 63 days without food. Ngarimu and his supporters were eventually arrested for trespass, but they achieved media attention for their complaints about intimidation, discrimination and substandard conditions at Pāremoremo. Ngarimu, released from the prison a few weeks earlier, was supporting the hunger strike of fellow prisoner Irwin Babbington. Babbington wanted prison authorities to establish a grievance committee of Māori kaumātua who would have access to inmates 24 hours a day.