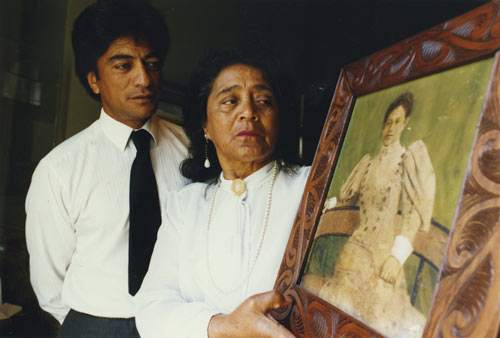 A portrait of prominent Māori suffragist Meri Mangakāhia is displayed by her granddaughter Raukawa Lillian Adams and great-grandson Lucien Mangakāhia. Meri Mangakāhia belonged to Ngā Kōmiti Wāhine (the committees of women), which were part of the 19th-century Kīngitanga (Māori king) movement. Addressing Te Paremata Māori (the Māori parliament), Mangakāhia argued that women should be able to vote and stand for election to it. Te Paremata was vitally concerned with land loss, and Māori women’s ownership and control of land was one reason why they needed to take part in discussion and decision-making. Another reason was the hope that Queen Victoria would reply to a petition about land loss presented by Māori women – petitions from Māori men had gone unanswered.