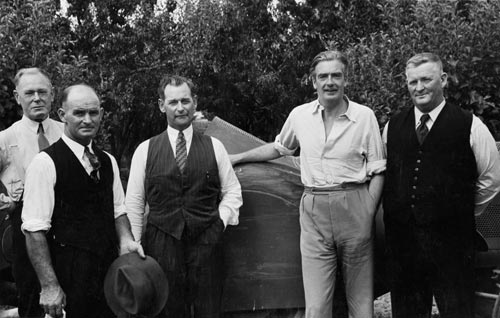 Keith Holyoake (centre) of the National Party tours his orchard at Umukurī, near Motueka, in 1949. (The man without a tie is Anthony Eden, then deputy leader of the Conservative Party in the United Kingdom, who went on to be prime minister from 1955 to 1957). Holyoake became a member of Parliament in the 1930s, and was dubbed ‘minister of tobacco’ for his lobbying on behalf of the tobacco growers of his region. Holyoake went on to become New Zealand’s longest-serving prime minister – he held the position for two months in 1957 (when Sid Holland stepped down), and again from 1960 to 1972. He was governor-general from 1977 to 1980.